The Binding of Isaac: Revelations is being released in a 'chapter' format. Each chapter adds a new floor, new items and, possibly, new characters to the game. Currently, three chapters have been planned for the mod.

Of the three, the first released was "Glacier". Released January 5th, 2018 on the Steam Workshop and the Modding of Isaac Website, Glacier added a plethora of content to the game, as well as a brand new floorpath to explore which was separate from the main game; which, at the time, was a modding feat of its own.

On the 12th of January, 2018, a video titled 'The Binding of Isaac: Revelations Ch2 Reveal' was uploaded to the Team Revelations YouTube channel. The trailer shows Isaac standing on a broken mirror with a dust cloud in the background, then showing the text 'The Binding of Isaac: Revelations - Ch. 2 Enter the Tomb', teasing players on the next installment of the mod. Tomb released on October 13th of 2018 on the Steam Workshop. Tomb continued off of the floorpath created in Chapter One, adding in much more new content as well as reworking and adding new content into the first chapter.

On the 20th of October, 2018, a video titled 'Revelations Chapter 3 Reveal' was uploaded to the Team Revelations YouTube channel, showing the third installment to be called "Vestige" 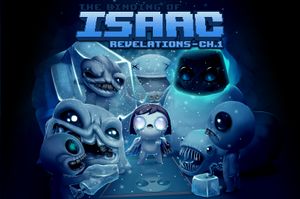 Glacier is the first chapter of Revelations. It adds over 20 items, 4 trinkets, 1 new character, and 1 new alternative floorpath to the game. It also adds a variety of enemies and eight new bosses to the game. The chapter takes on an icy theme, with the chapter's enemies, bosses, etc all adhering to this same theme.

To access the Glacier floor, enter the shop on either the first or second floors in vanilla Afterbirth+ and there will be a door which will allow you to travel to Glacier 1 or Glacier 2, depending on which floor you entered it on. The floorpath is considered to be harder than the beginning vanilla floors, so to encourage players to take the path, the shops in the Glacier have guaranteed Revelations items for sale in a special vending machine separate from the other shop items. Glacier 1 has one Revelations item on sale, and Glacier 2 has one Revelations item for full price. There is also a chance to find the Dante Satan Room in Glacier as well.

Glacier adds new mechanics to the game, adding to the mod's theme of ice. Ice tiles may appear in rooms, causing the player to slide around; ice creep may replace other forms of creep in certain instances and will have the same effect as the ice tiles; and Chill Rooms are a room type that will freeze the player's head if they are far away from a source of heat for too long, rendering them unable to fire.

On Glacier 2, the Mirror Room Door will also spawn, allowing you to enter the Mirror to fight Narcissus.

On March 17th, 2018, Glacier received a content update dubbed the "Champion Update". The update added champion variants to all of the bosses added in the mod, as well as some other minor content. 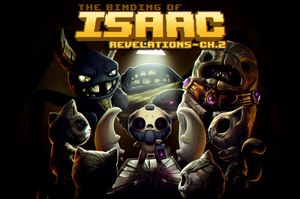 Tomb is the second chapter to Revelations. It adds over 25 items, 2 trinkets, 1 new character, and 1 new alternative floorpath to the game. It also adds a variety of new enemies and seven challenging bosses.

To access the Tomb floor, enter the shop on either the third or fourth floors in vanilla Afterbirth+ and there will be a door which will allow you to travel to Tomb 1 or Tomb 2, depending on which floor you entered it on. You can also access the Tomb by beating Glacier 2's boss. The floorpath is considered to be harder than Glacier or Caves, so to encourage players to take the path, the shops in the Tomb have guaranteed Revelations items for sale, contained in a special vending machine separate from other shop items.

Tomb adds new mechanics to the game, adding to the mod's theme of ancient tombs. Trap tiles may appear on the ground, and when the player steps on one of them, it will activate an event depending on which tile type you stepped on. There are two types of enemy rooms in the Tomb: Tiled rooms, featuring traps and rag enemies; and sand rooms, with sand enemies and sandcastles.

Tomb also added a new mechanic called Shrine Rooms. These rooms have two statues, both with varying effects which depend on the statues shown. The player must choose one of the statues before leaving the room, adding the chosen statue's effects to the current (and possibly future) floors.

In Tomb 2, the Mirror Room Door will also spawn, allowing you to enter the Mirror to fight Narcissus 2.

Upon release, Team Revelations promised a "content patch" on the Steam Workshop page one month before its release. After missing the one month mark, Team Revelations said that the update would be dubbed the "Sin Update" and that they would take more time to develop the update to add more content to it. The Sin Update released on June 21, 2019, with a trailer which showcased some of the update's content. 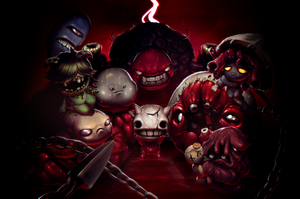 Vestige is the third chapter to Revelations which is not released yet.

The name and theme of the chapter were both revealed through a short teaser video which was posted on October 20th, 2018, one week after the release of the Sin Update. On June 29th, 2019, the splash art got revealed, featuring the new character Bertran and all of the new bosses that will be included in the chapter.

The chapter is supposed to be published after the release of the official Repentance DLC.

After the release of the Sin Update, the bosses and the character of this chapter were revealed on Discord daily, with one per day. The contents of these reveals can be seen in the table below: