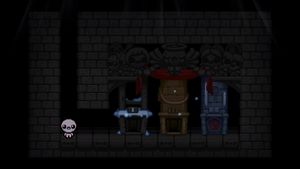 The Hub is a room added in Chapter 2's Sin Update. Its purpose is to allow the player to travel between the three floorpaths in the game: the base game floorpath, Revelation's floorpath, and Repentance's floorpath (Antibirth DLC that has yet to be released). The player gets to the Hub by entering the trapdoor at the beginning of the run in the first room, or by beating the boss at the end of whatever floor they're on. Instead of bringing you to the next floor, it will drop you down into a crawlspace containing three doors, each leading to the three floorpaths. The player can then choose which floorpath they would like to travel to for the next floor.