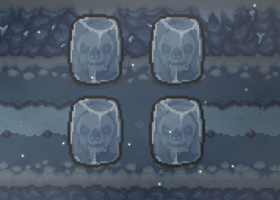 Ice Hazards are ice blocks that can be encountered in Glacier. They are invincible and can contain a variety of objects.

These are the default version of Ice Hazards. They can be pushed around and will slide on the ground. Once they make contact with a wall or other solid object, they break and release their contents.

Spiky Ice Hazards appear as part of Chuck's battle. They deal damage when Isaac touches one, and are stuck to the ground and do not slide. The only way to break them is to lure Chuck into one, and he will punch it away into a wall or nearby solid object.

I. Blob Ice Hazards spawn a Frosty I. Blob when destroyed. They have a very small chance to replace Clotty Ice Hazards when they spawn upon entering a room.