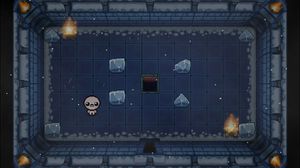 Tomb Entrance rooms were special rooms which allow you to enter Tomb, the second floor to Revelation's new floorpath. They were found via the shop of the second and third vanilla floor, or by beating the boss in Glacier 2.

As of the Sin Update, these rooms were removed and replace by the Hub.